This Masterpiece is without a doubt a one of a kind property, unlike anything you have seen!!

It has been featured in HGTV, Dallas Morning News, and D Magazine.

It is known to almost everyone in east Dallas/ White Rock area as “the underground house.”   It’s a completely ‘Green’ house, built just before green living was all the rage.   Yet that is exactly what the architect Frank Moreland and home owner were working to achieve.    With over 100 tons of reinforced concrete over the dwelling and 1000 tons of earth on top of the concrete, it is not only extremely energy efficient, it is also almost eerily quiet.  The summer that temperatures in Dallas soared over 100 degrees for more than 70 days, the total electric bill for June, July and August combined was just over $200.00.  Energy efficiency and security are what this home is all about. 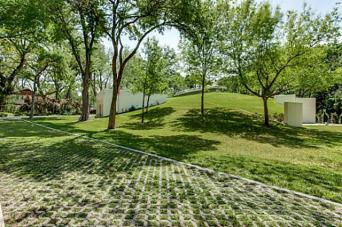 When the owner purchased the property that parcel of land did not even have an address.   In keeping with the futuristic element of this incredibly special house, the owner went to the city and got the address ‘2001 North Buckner Blvd.  (As in A Space Odyssey).

Within the heart of the city, this creek lot on 1.84 acres overlooks thick, lush foliage along Ash Creek.  No other homes or buildings can be seen from the windows or the scenic back porch.  There is a 100’expance of windows going across the front (facing away from Buckner) that make you feel like you are living in a countryside or forest.   Above the house, actually 22’ up from the living room floor is a turret of glass blocks protruding above the hill facing east and west.  This allows sunlight to pour into the house below.  Since there are no right angles in the walls, but only rounded corners, the light filters throughout the living areas making it light and bright, so much so you don’t even need lights on during the daytime.   Some would expect it to be dark and dreary living underground, which is completely opposite of what it is!

The only evidence that this 4561 square foot home exists on this property is the concrete three car garage that is imbedded in the hillside.  It looks like a beautiful treed lot with greenery and a soft hill.  Even the driveway, which will hold over a dozen cars, was built from Turfstone pavers, a grid type base that allows grass to grow between the grids.  This makes the driveway somewhat visually go away.

Architect Frank Moreland broke ground on 2001 N. Buckner in 1989 and was competed in 1991.   Mr. Moreland stated this home would last well over 1000 years as it is protected from the elements and is considered almost fireproof.  Mostly land disguises that a dwelling exists in addition to the 1000 tons of earth, and 100 tons of reinforced concrete, is also has 60 tons of steel.  Each piece of rebar was individually tagged and put together like a puzzle.  It took 72 truckloads of concrete to pour the foundation, some of it as much as 6’ deep.   The contractor in charge of the concrete pour had just retired after pouring several if the pads for Cape Kennedy. When you enter the house from the creek side, you are just as blown away as you are from the drive up, still incredibly unique in every way.  Just as cozy as can be, but large enough to seat 60 people in the large great room!!    There is bench seating built into the 1500 square foot living room that can seat 45.

The architect of the property was the late Frank L. Moreland, a Fort Worth Native.  Mr. Moreland was highly recognized in his field as an esteemed architect, college professor and author of four books on architecture and design; specifically about earth sheltered houses which were his passion. He received numerous degrees from UT Austin and TCU, meeting all the requirements for his doctorate.  He earned his master’s degree at UC Berkley.  He was highly influenced by  Frank Lloyd Wright.  Later he became a professor at Penn State and University of Texas where he taught architecture.  In 1975 he coordinated a National Science Foundation conference on earth-covered buildings and edited the published proceedings; he did the same for the Department of Energy in 1979.  In 1981 he prepared a report for FEMA.  That was the year he left academia to follow his passion and become a contractor and start his own firm to build sustainable buildings as well as “earth sheltered” homes.  (The proper term for the underground house).  His inspiration was a professor from the Civil Engineering Department of the University of Texas. “He was an inspiration, and deeply influenced my interest in structures, particularly concrete.  I vividly recall his presentation of the performance of reinforced concrete structures in the massive 1950s earthquake in Mexico City.”

He had built 9 other earth sheltered houses before 2001 North Buckner, but this was his first built in an urban setting.

The current owner had an interest in earth sheltered homes for many years. His curiosity caused him to start researching the concept and seeking an architect and designer.  Then he began his search for the perfect lot.  Meanwhile, Architect Frank Moreland had begun having private meetings in his home in Fort Worth attended by 6 or 8 couples.  Moreland would show interested parties videos of his renderings and designs for earth sheltered homes and tell their benefits.   Current owner Bill Coleman began attending those meetings and was smitten! 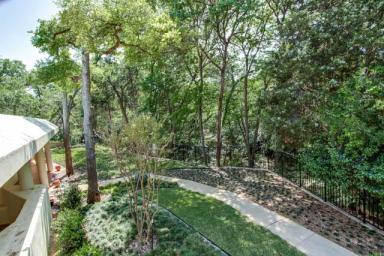 Coleman found the 1.8 acre plat on Buckner that backed to the Ash Creek.  Knowing that the earth sheltered part would be along Bucker to buffer noise; the front door would essentially face the Creek.  It is VERY quiet in his home.  Coleman stated “Solitude in the middle of the city is one thing I’ve particularly grown to appreciate”  “It’s like a park.”

Originally this land had been under contract with a developer that wanted to erect 5 homes in that 1.8 acres rather than one.

After construction was complete the owner commissioned renowned artist Carmen Valarde from Taos New Mexico to come work on the finish out the interior.  Carmen came to Dallas from Taos New Mexico along with 3 men and her grandson.  During those three weeks, with her own hands Carmen applied the adobe surface to the three Kiva fireplaces, a large banco (which were the benches surrounding the great room).  She also built privacy walls, display walls and built in cabinets.    They all have the flavor of a Taos style building.

Carmen is a household name in Taos.  She received from the Smithsonian Institute and National Park Service a Certificate of Appreciation for her contribution to the Festival of American Folk life;  From the Taos County Historical Society presented an Award of Merit in appreciation for her work as folklore ambassador representing the culture of Northern New Mexico and her preservation of its traditions through her work and life; She also received  A Proclamation from the office of the Mayor in Taos as the Woman of the Year, “Carmen Velarde Day”  .  She was invited twice to represent New Mexico by the Smithsonian Institution of Washington D.C.

Mr. Bill Coleman and his wife Mirella purchased the land in 1985.  When they broke ground they had a $500,000 budget.    After a year of building, and ANOTHER $500,000 to the price tag, they took a 9 month sabbatical to evaluate and discuss.  All together it took 2 years from start to finish and was finished in 1990.

Mr. Coleman’s earth sheltered home has very low insurance risk thus low rates, since there is no chance of hail damage on the property as well as the fact it is said to be semi-fire resistant rated by the State of Texas due to the fact that it is a concrete structure and floor, likened to a commercial building.  Architect Frank Moreland stated that this homes rock solid construction gives the structure a life expectancy of
1,000 years and beyond.

The insurance rates are low on the property because of the semi-fire proof rating, plus you obviously would not have hail damage on the grass roof!

This is the ultimate ‘GREEN’ building.  Now the top of the house is covered in solar panels that decrease the energy by 1/3rd.  While the property is very low upkeep, you still have to mow and water the roof!!

It is also often referred to as a bunker, a perfect solution for those that are looking for the highest level of security. In addition, cameras mounted front and back give you 24/7 access to activity from any computer in the world.

Vicki White Lead Agent, REALTOR® Vicki understands the needs and desires of buyers and sellers alike. Her knowledge of residential real estate is extensive due to first hand experience. She has purchased and renovated more than 20 homes all over Dallas. Not only did she select the properties, she designed and implemented the renovations and staged them for sale. She has owned and operated a highly successful staging business working on properties from $100,000 to $3,000,000. She "set the stage" to make her clients homes appealing to buyers. Vicki has worked as a construction project manager acting as liaison between developer, contractor, buyers and residents. In addition to her experience, Vicki, a native Dallasite is highly energetic and enthusiastic. She has had a lifelong passion for the real estate industry. • Dallas Morning News Neighbors Choice Award: 2009 BEST REALTOR • Professional Excellence Award from Outstanding Woman of Today from Altrusa International • Junior League of Dallas • Junior League of Richardson - Past President • Richardson Medical Center - Advisory Board • Rape Crisis Center - Volunteer of the year • Network of Community Ministries • Charter member of The Greater Dallas Luxury Home Coalition • Consistent Multi-Million Dollar Producer
View all posts by Vicki S. White →
This entry was posted in Uncategorized and tagged 2001 N. Buckner, City Center Dallas TX, Dallas TX Real Estate, Forest Hills Dallas TX, Forest Hills Dallas TX Real Estate, Real Estate Blog, Vicki White City Center, Vicki White Homes, Vicki White Realtor, VickiWhiteHomes.com. Bookmark the permalink.